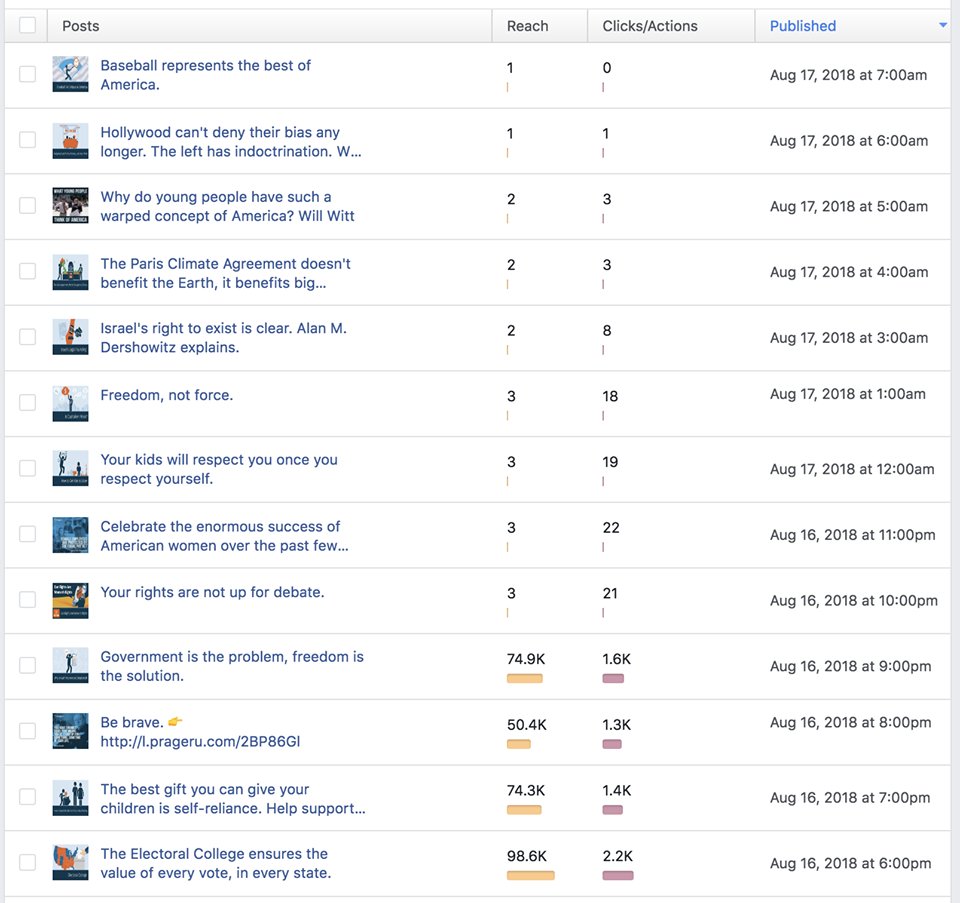 Facebook’s chief executive, Mark Zuckerberg, told Congress this year that he wanted the company to “be a platform for all ideas.”CreditCreditTom Brenner/The New York Times


By Kate Conger and Sheera Frenkel

SAN FRANCISCO — The post went up quietly on Facebook’s internal message board last week. Titled “We Have a Problem With Political Diversity,” it quickly took off inside the social network.

“We are a political monoculture that’s intolerant of different views,” Brian Amerige, a senior Facebook engineer, wrote in the post, which was obtained by The New York Times. “We claim to welcome all perspectives, but are quick to attack — often in mobs — anyone who presents a view that appears to be in opposition to left-leaning ideology.”

Since the post went up, more than 100 Facebook employees have joined Mr. Amerige to form an online group called FB’ers for Political Diversity, according to two people who viewed the group’s page and who were not authorized to speak publicly. The aim of the initiative, according to Mr. Amerige’s memo, is to create a space for ideological diversity within the company.

The new group has upset other Facebook employees, who said its online posts were offensive to minorities. One engineer, who declined to be identified for fear of retaliation, said several people had lodged complaints with their managers about FB’ers for Political Diversity and were told that it had not broken any company rules.

Another employee said the group appeared to be constructive and inclusive of different political viewpoints. Mr. Amerige did not respond to requests for comment.

The activity is a rare sign of organized dissent within Facebook over the company’s largely liberal workplace culture. While the new group is just a sliver of Facebook’s work force of more than 25,000, the company’s workers have in the past appeared less inclined than their peers at other tech companies to challenge leadership, and most have been loyalists to its chief executive, Mark Zuckerberg.

But over the past two years, Facebook has undergone a series of crises, including the spread of misinformation by Russians on its platform and the mishandling of users’ data. Facebook has also been accused of stifling conservative speech by President Trump and Senator Ted Cruz, Republican of Texas, among others. This month, the social network barred the far-right conspiracy theorist Alex Jones, a move that critics seized on as further evidence that the company harbors an anti-conservative bias.

Within Facebook, several employees said, people have argued over the decisions to ban certain accounts while allowing others. At staff meetings, they said, some workers have repeatedly asked for more guidance on what content the company disallows, and why. Others have said Facebook, out of fear of being seen as biased, has let too many right-wing groups flourish on the site.

The dispute over employees’ political ideology arose a week before Sheryl Sandberg, Facebook’s chief operating officer, is scheduled to testify at a Senate hearing about social media manipulation in elections. A team helping Ms. Sandberg get ready for the hearing next Wednesday has warned her that some Republican lawmakers may raise questions about Facebook and biases, according to two people involved in the preparations.

On Tuesday, Mr. Trump again brought up the issue of bias by tech companies with tweets attacking Google. In remarks later in the day, he widened his focus to include Twitter and Facebook.

Those companies “better be careful because you can’t do that to people,” Mr. Trump said. “I think that Google, and Twitter and Facebook, they are really treading on very, very troubled territory and they have to be careful. It is not fair to large portions of the population.”

‘We Have a Problem With Political Diversity’
A senior Facebook engineer wrote an internal message about what he described as the company’s “monoculture.” 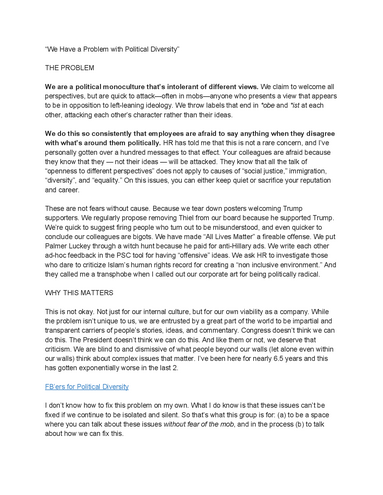 2 pages, 0.08 MB
Facebook has long been viewed as a predominantly liberal company. Mr. Zuckerberg and Ms. Sandberg have donated to Democratic politicians, for example, and have supported issues such as immigration reform.

The social network has sometimes struggled to integrate conservatives into its leadership. Palmer Luckey, the founder of Oculus, the maker of virtual reality goggles that Facebook acquired, was pressured to leave the company last year, months after news spread that he had secretly donated to an organization dedicated to spreading anti-Hillary Clinton internet memes. And Peter Thiel, an outspoken supporter of Mr. Trump, has faced calls for his resignation from Facebook’s board.

Mr. Zuckerberg publicly defended Mr. Thiel last year, saying that he valued Mr. Thiel and that it was important to maintain diversity on the board. In an appearance before Congress this year, Mr. Zuckerberg responded to a question about anticonservative bias by saying he wanted Facebook to “be a platform for all ideas.”

In May, Facebook announced that former Senator Jon Kyl, an Arizona Republican, would lead an inquiry into allegations of anticonservative bias on the social network. New employees also go through training that describes how to have respectful conversations about politics and diversity.

Other Silicon Valley companies, including Google, have also experienced a wave of employee activism over diversity. If tech companies are willing to adjust their workplaces to make underrepresented groups more welcome, some employees argue, they should extend the same regard to those who do not fit the liberal-leaning Silicon Valley mold.

Mr. Amerige, who started working at Facebook in 2012, said on his personal website that he followed philosophical principles laid out by the philosopher and writer Ayn Rand. He posted the 527-word memo about political diversity at Facebook on Aug. 20.

On issues like diversity and immigration, he wrote, “you can either keep quiet or sacrifice your reputation and career.”

Mr. Amerige proposed that Facebook employees debate their political ideas in the new group — one of tens of thousands of internal groups that cover a range of topics — adding that this debate would better equip the company to host a variety of viewpoints on its platform.