Using subsidised electricity, farmers pump groundwater at will, drawing up more annually than China and America combined. A recent European Commission report counted more than 20m boreholes in India, up from tens of thousands in the 1960s. The water table is falling on average by 0.3 meters and by as much as 4 meters in some places. Water-starved regions often cultivate water-hungry crops like paddy, cotton and sugarcane. Punjab in the north and Tamil Nadu and Karnataka in the south continue to squabble over the ownership of rivers. The problem is not lack of adequate water, but its reckless overuse. China, with a larger population, uses 28% less fresh water than India.
Kliknij aby rozwinąć... 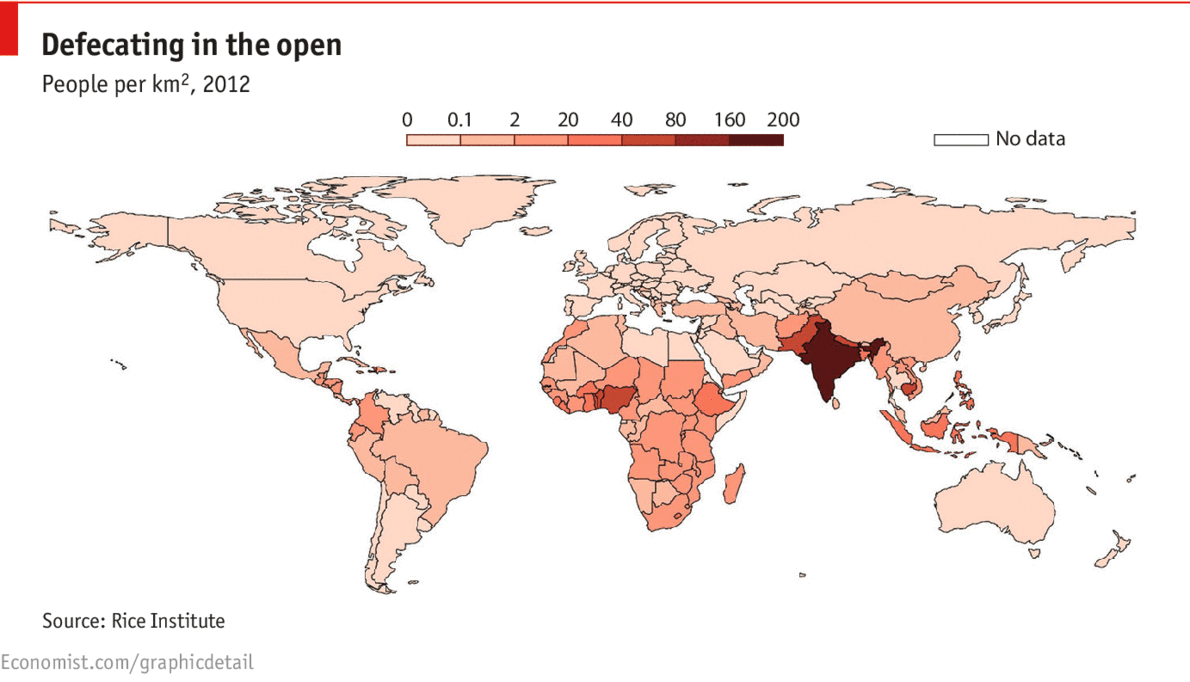 But it is very rare indeed that a country develops an outsized technological infrastructure breakthrough that leaves the rest of the world far behind.

But exactly this has just happened in India... and no one noticed.

India has, without question, made the largest technological breakthrough of any nation in living memory.

Its technological advancement has even left Silicon Valley standing. India has built the world’s first national digital infrastructure, leaping at least two generations of financial technologies and has built something as important as the railroad was to the UK or the interstate highways were to the US.

India is now the most attractive major investment opportunity in the world.

It’s all about something called Aadhaar and a breathtakingly ambitious plan with flawless execution.

What just blows my mind is how few people have even noticed it. To be honest, writing the article last month was the first time I learned about any of the developments. I think this is the biggest emerging market macro story in the world.

India, pre-2009, had a massive problem for a developing economy: nearly half of its people did not have any form of identification. If you were born outside of a hospital or without any government services, which is common in India, you don’t get a birth certificate. Without a birth certificate, you can’t get the basic infrastructure of modern life: a bank account, driving license, insurance or a loan. You operate outside the official sector and the opportunities available to others are not available to you. It almost guarantees a perpetuation of poverty and it also guarantees a low tax take for India, thus it holds Indian growth back too.

Normally, a country such as India would solve this problem by making a large push to register more births or send bureaucrats into villages to issues official papers (and sadly accept bribes in return). It would have been costly, inefficient and messy. It probably would have only partially worked.

But in 2009, India did something that no one else in the world at the time had done before; they launched a project called Aadhaar which was a technological solution to the problem, creating a biometric database based on a 12-digit digital identity, authenticated by finger prints and retina scans.

Aadhaar became the largest and most successful IT project ever undertaken in the world and, as of 2016, 1.1 billion people (95% of the population) now has a digital proof of identity. To understand the scale of what India has achieved with Aadhaar you have to understand that India accounts for 17.2% of the entire world’s population!

But this biometric database was just the first phase...

Once huge swathes of the population began to register on the official system, the next phase was to get them into the banking system. The Government allowed the creation of eleven Payment Banks, which can hold money but don’t do any lending. To motivate people to open accounts, it offered free life insurance with them and linked bank accounts to social welfare benefits. Within three years more than 270 million bank accounts were opened and $10bn in deposits flooded in.

People who registered under the Aadhaar Act could open a bank account just with their Aadhaar number.

Phase 3 – Building Out a Mobile Infrastructure

The Aadhaar card holds another important benefit – people can use it to instantly open a mobile phone account. I covered this in detail last month but the key takeaway is that mobile phone penetration exploded after Aadhaar and went from 40% of the population to 79% within a few years...

The next phase in the mobile phone story will be the rapid rise in smart phones, which will revolutionise everything. Currently only 28% of the population has a smart phone but growth rates are close to 70% per year.

In July 2016, the Unique Identification Authority of India (UIDAI), which administers Aadhaar, called a meeting with executives from Google, Microsoft, Samsung and Indian smartphone maker Micromax amongst others, to talk about developing Aadhaar compliant devices.

Qualcomm is working closely with government authorities to get more Aadhaar-enabled devices onto the market and working with customers – including the biggest Android manufacturers – to integrate required features, such as secure cameras and iris authentication partners.

Tim Cook, CEO of Apple, recently singled out India as a top priority for Apple.

Microsoft has also just launched a lite version of Skype designed to work on an unstable 2G connection and is integrated with the Aadhaar database, so video calling can be used for authenticated calls.

But that is not all. In December 30th 2016, Indian launched BHIM (Bharat Interface for Money) which is a digital payments platform using UPI (Unified Payments Interface). This is another giant leap that allows non-UPI linked bank accounts into the payments system. Now payments can be made from UPI accounts to non-UPI accounts and can use QR codes for instant payments and also allows users to check bank balances.

While the world is digesting all of this, assuming that it is going to lead to an explosion in mobile phone eWallets (which is happening already), the next step is materializing. This is where the really big breakthrough lies...

Payments can now be made without using mobile phones, just using fingerprints and an Aadhaar number.

Fucking hell. That is the biggest change to any financial system in history.

What is even more remarkable is that this system works on a 2G network so it reaches even the most remote parts of India!! It will revolutionise the agricultural economy, which employs 60% of the workforce and contributes 17% of GDP. Farmers will now have access to bank accounts and credit, along with crop insurance.

But again, that is not all... India has gone one step further...

In 2016, India introduced another innovation called India Stack. This is a series of secured and connected systems that allows people to store and share personal data such as addresses, bank statements, medical records, employment records and tax filings and it enables the digital signing of documents. This is all accessed, and can be shared, via Aadhaar biometric authentication.

Essentially, it is a secure Dropbox for your entire official life and creates what is known as eKYC: Electronic Know Your Customer.

Using India Stack APIs, all that is required is a fingerprint or retina scan to open a bank account, mobile phone account, brokerage account, buy a mutual fund or share medical records at any hospital or clinic in India. It also creates the opportunity instant loans and brings insurance to the masses, particularly life insurance. All of this data can also in turn be stored on India Stack to give, for example, proof of utility bill payment or life insurance coverage.

What is India Stack exactly?
...

India Stack is the framework that will make the new digital economy work seamlessly.

It’s a set of APIs that allows governments, businesses, startups and developers to utilise a unique digital infrastructure to solve India’s hard problems towards presence-less, paperless and cashless service delivery.

India Stack provides the ability to operate in real time, transactions such as lending, bank or mobile account opening that usually can take few days to complete are now instant.

As you can see, Smart phones will act as key to access the kingdom.

This is fast, secure and reliable; this is the future... 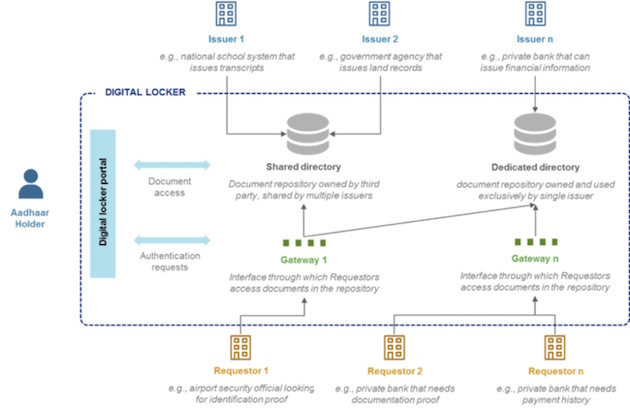 This revolutionary digital infrastructure will soon be able to process billions more transactions than bitcoin ever has. It may well be a bitcoin killer or at best provide the framework for how blockchain technology could be applied in the real world. It is too early to tell whether other countries or the private sector adopts blockchain versions of this infrastructure or abandons it altogether and follows India’s centralised version.

India Stack is the largest open API in the world and will allow for massive fintech opportunities to be built around it. India is already the third largest fintech centre but it will jump into first place in a few years. India is already organizing hackathons to develop applications for the APIs.

It has left Silicon Valley in the dust.

The final stroke of genius was the cash ban, which I have also discussed at length in the past. The cash ban is the final part of the story. It simply forces everyone into the new digital economy and has the hugely beneficial side-effect of reducing everyday corruption, recapitalising the banking sector and increasing government tax take, thus allowing India to rebuild its crumbling infrastructure... 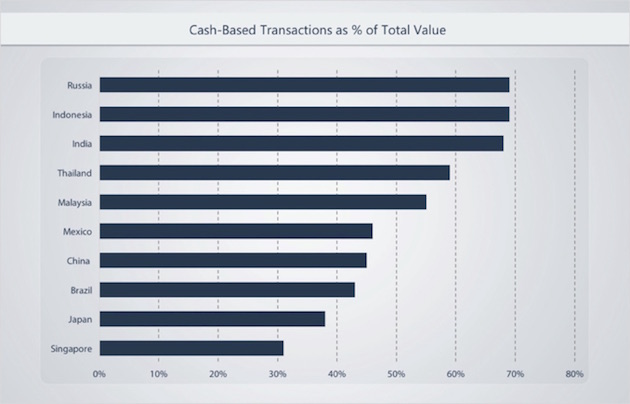 India was a cash society but once the dust settles, cash will account for less than 40% of total transactions in the next five years. It may eliminate cash altogether in the next ten years.

The cash ban digitizes India. No other economy in the world is even close to this.

Everyone thinks they know about the Indian economy – crappy infrastructure, corruption, bureaucracy and antiquated institutions but with a massively growing middle class. Well, that is the narrative and has been for the last 15 years.

But that phase is over and no one noticed. So few people in the investment community or even Silicon Valley are even vaguely aware of what has happened in India and that has created an enormous investment opportunity.

Telecom, banking, insurance and online retailing will boom, as will the tech sector.

Nothing in India will be the same again.

FDI is already exploding and will rise massively in the years ahead as technology giants and others pour into India to take advantage of the opportunity... 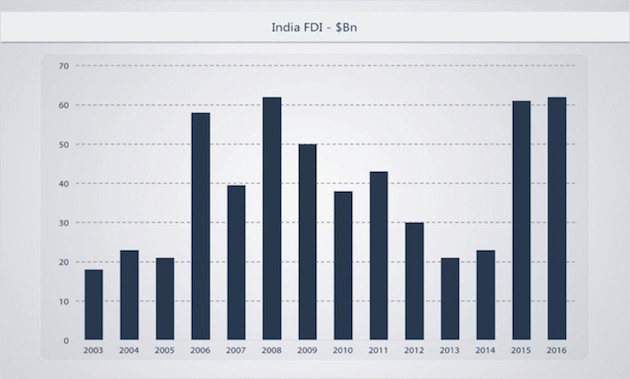 I am long the telco sector (Bharti)...

And I am long the Nifty Banks Index...

I think India is going to offer an entire world of opportunity going forwards.

If I can sum up, it’s in this one chart: the SENSEX in US Dollars. It looks explosive for the next 10 years...